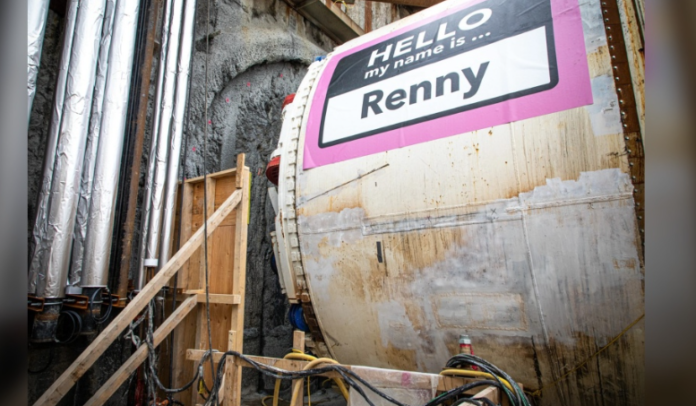 As tunnel boring machines dig through the earth, soil and rocks are removed by a conveyor belt and transported back to the launch shaft site. This material is then hauled off site for proper disposal.

The machines install tunnel liners made of reinforced concrete and designed to support the earth and resist pressure from soil, rocks, and water that surround the tunnel to give the tunnels their structure – critical for safety and keeping the TBMs moving.

The precast tunnel liners for the Eglinton Crosstown West Extension are being manufactured by CSI Forterra Canada in Whitby – the same company that is supplying liners for the Scarborough Subway Extension.

Some facts about Renny and Rexie:

They each weigh about 750 tonnes each, about five times the weight of a blue whale.

They are each 6.58 metres in diameter, which is taller than a giraffe.

At 131 metres in length, they are each a little over a quarter of the height of the CN Tower.

To get the site ready to start tunnelling, a launch shaft was made that could hold the volume of 11 Olympic-size swimming pools.