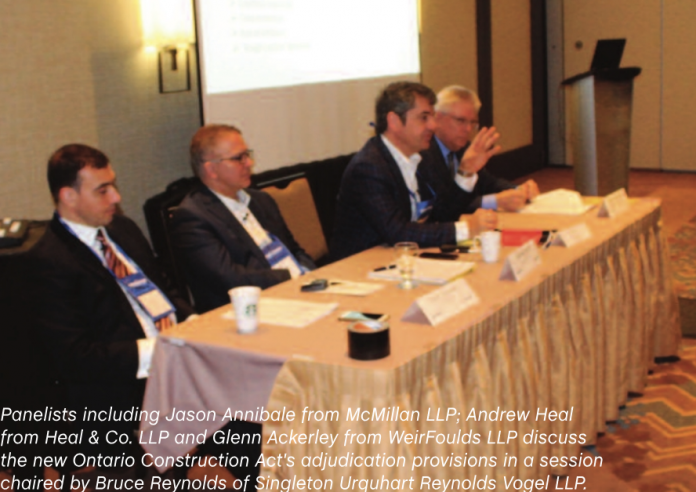 How will the new adjudication procedures under the new Ontario Construction Act affect the way construction disputes and payment provisions are resolved?

The answer is there is much uncertainty, especially since the ground-breaking provisions are new to Canada and will only go into effect on a gradual basis in the months following their initial implementation on Oct. 1.

One of the key leaders behind the new act, Bruce Reynolds of Singleton Urquhart Reynolds Vogel LLP, who led the extensive review of the old Construction Lien Act and provided a report with 100 recommendations that led to the new legislation, provided some observations during a panel discussion at the Ontario General Contractors’ Association (OGCA) symposium on April 12.

Here are some of his thoughts as the working session about Adjudication under the New Ontario Construction Act session concluded.

Reynolds in his remarks explained that the extremely quick dispute resolution method might be modified for large and complex disputes.

“The code of conduct that applies to adjudicators requires them to only accept the responsibilities to adjudicate if the are of the view that they are capable, in the circumstance, to properly resolving (the issues) in adjudication,” he said. So if someone “come in the door and asks for adjudication for a $200 million claim” and tries to force the matter through in 44 days, the adjudicator can say: “Hey, I cannot properly resolve this dispute in 44 days, so what we are going to do is we are going to have a conversation about what is aggressive but achievable and a reasonable schedule for the resolution for this dispute.”

The mandatory, rapid adjudication process through competent adjudicators working under the Authorized Nominating Authority (ANA) is a cornerstone of the new system and the concept is that most disputes can be resolved within 90-day lien perfection period – but clearly there will be some disputes that take longer to settle, he indicated.

Reynolds says he understands that the United Kingdom’s dispute resolution system results in agreements to resolve the most complex disputes within six months – longer than the planned Ontario standard statutory framework, but much more rapidly than the extremely lengthy process of resolving complex disputes currently in Ontario’s court systems. “So we believe this is manageable and will be managed in the market like the adjudicators.”

Reynolds also addressed the ANA’s structure and role. The Ontario model sets a single government-controlled ANA with a roster of qualified adjudicators, while other markets such as Australia have allowed multiple agencies to nominate and manage the adjudicators.

“In our observations following research, (we found) that, ‘well it’s nice to give choices, it’s nice to let the market operate’ (but) it resulted, particularly in Australia in some jurisdictions in a very low training of the adjudicators. The adjudicators who were not properly trained, didn’t do their job properly (and) that resulted in a very high degree of their determinations being overturned over time.”

“So we opted for a single ANA with a very strong knowledge because of part of the role (of the ANA) is also going to lead in resolving complaints and exercise oversight,” and manage the renewal of adjudicators’ certifications. “So it doesn’t function like a regular regulatory authority – so the intent is that the quality of adjudicators in Ontario will be very high.”

“Having said that, the market will select those adjudicators who develop a reputation for doing a nice job,” Reynolds said, “And that’s correct and that’s the way it should be.”

“We believe a strong ANA model in Ontario will go a long way for providing a very high quality of (dispute) determination.”

“I want to reemphasize that the bar is set very, very high” for leave for judicial review of adjudicators’ decisions. “I think that in my view at least, it’s likely that in the end, the Ontario courts will follow the English courts,” for a kind of rough and quick justice.

In other words, even if the adjudicator gets it wrong as long as he gives the parties a fair opportunity to present their case and respond to the other party, then the payment needs to be made, Reynolds said. Of course, even in the conventional court system, judges get it wrong from time to time.

Reynolds also noted how the Ontario dispute resolution model is spreading across the country, with a new federal prompt payment bill and similar legislation in three other provinces. While the other provinces aren’t always following Ontario’s model word for word, they are very similar.

“To make the point here, this movement is phenomenal,” Reynolds said. “It’s moving across the country. We have had reach-out from folks in multiple provinces who have not yet tabled a bill but are likely to, and it’s really important that these pieces of legislation to the extent possible, are one.”

Reynolds described the intensive three-year consultative process to build the new Ontario Construction Act, observing that the OGCA had a major role in the process.

“This is a piece of legislation which is a product of the community and I think we collectively believe that it’s going to be a great benefit for the Ontario construction industry,” he said.