The Ontario government has released the Request for Qualifications (RFQ) for the design and delivery of the new subway stations, rail and systems work on the Scarborough Subway extension.

“The release of this procurement package for the Scarborough Subway Extension marks another milestone reached,” said Caroline Mulroney, minister of transportation.

“Each project milestone we achieve demonstrates our government’s unwavering commitment to building a world-class, efficient rapid transit network that will cut through congestion, reduce greenhouse gas emissions and get people to where they need to go faster.”

To expedite work the project has been designed as two separate contracts of work. In May 2021, the province awarded the first contract for advanced tunnelling to Strabag. In June 2021, the province announced the official ground breaking for the Scarborough Subway Extension, marking the start of construction on the largest subway expansion in Canadian history.

“The release of the request for qualifications marks an important step forward towards the delivery of this project that will provide seamless transit for those heading into and out of the downtown core and those travelling within Scarborough,” said Vijay Thanigasalam, MPP for Scarborough—Rouge Park. 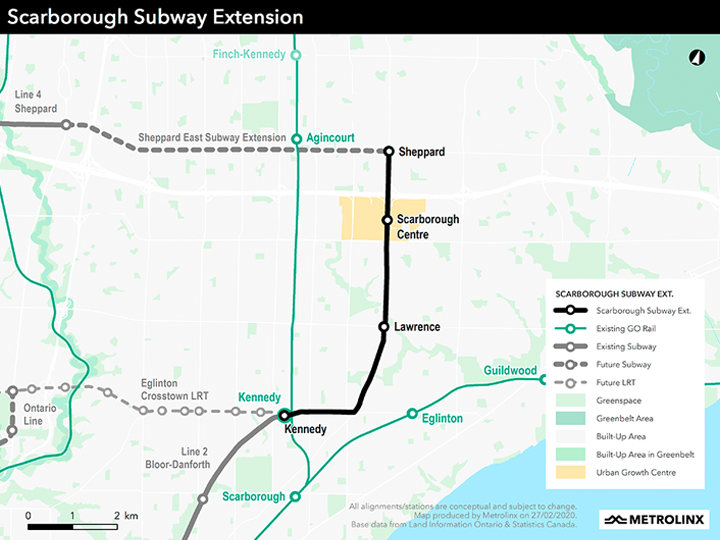 Following the close of the RFQ, Infrastructure Ontario and Metrolinx will evaluate the submissions and announce a shortlist of qualified proponents in early 2022. The shortlisted proponents will be invited to submit detailed proposals on the design and delivery of this package of work as part of the Request for Proposals process.

“The Scarborough Subway Extension will make it easier to get to jobs, schools and other key destinations throughout Toronto,” said Stan Cho, Associate Minister of Transportation.

“As our government continues to make progress on this project, now releasing the Request for Qualifications for the next package of works, we remain laser-focused on delivering this long-awaited transit for the residents and businesses of Scarborough.”

The three stop Scarborough Subway Extension is one of four priority subway projects in the Greater Toronto Area (GTA) being delivered as part of the largest subway expansion in Canadian history. It will extend the Toronto Transit Commission’s (TTC) Bloor-Danforth Line 2 approximately eight kilometres, from Kennedy Station to a new terminus at Sheppard Avenue and McCowan Road.

“Infrastructure Ontario is pleased to be a part of building new transit infrastructure in the City of Toronto, helping bring much-needed relief to commuters and families. The release of the RFQ for the Stations, Rail and Systems work is an important step towards getting a partner on board to help us deliver the Scarborough Subway Extension,” said Michael Lindsay, president and CEO, Infrastructure Ontario

The scope of work includes: