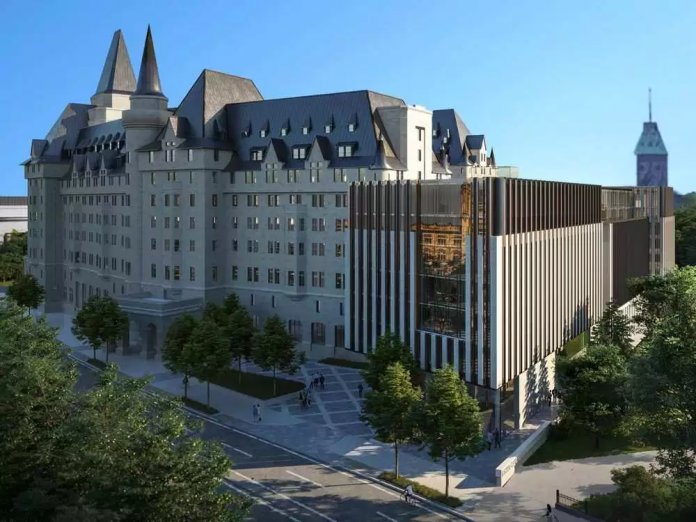 Ottawa City Council played political football with the planned redevelopment and expansion of the central Chateau Laurier Hotel this week. In the end the hotel owner’s Larco Investments Inc. received the green light to tear down an existing parking garage and build an expansion that has been widely condemned by heritage activists as “ugly.”

The project has been mired in controversy since Larco initially proposed in 2015 to tear down the garage and construct a new, extensive addition to the building at Parliament Hill’s edge.

Heritage advocates have argued that the proposed addition is out of character with the building’s design, mass, and structure.

At a meeting on Wednesday, a majority of 14 to 9 councillors voted against a proposal by Rideau Vanier Ward Coun. Matthew Fleury to revoke the heritage approval and refuse to issue a building permit for the project. Councillors Diane Deans and Rick Chiarelli then tried to put a “stall” on the project by proposing a motion to reconsider the decision – thinking that this would delay things through the summer, until the next full council meeting,

However, Mayor Jim Watson was ready for that move, and called in his own motion for a special council meeting just a day later – on Thursday – to vote on the reconsideration, which failed.

The developers say they have modified the design and complied with all of the city’s requirements.

Director of development Art Phillips and planning consultant Dennis Jacobs say in a letter to city council that Capital Holdings Ltd., a subsidiary of Larco Investments, has followed the city’s direction and has consulted with the National Capital Commission.

“We recognize there has been significant controversy in Ottawa over our proposed design,” the letter says as reported in The Ottawa Citizen. “Everyone has agreed that the above ground garage previously occupying the site had no heritage value and served only to limit any physical connection with Major’s Hill Park. However, what we have learned over the last three years is that there is no unanimity on what should replace the garage.”

In a memo to council, Rick O’Connor, the city clerk and solicitor, and Stephen Willis, general manager, planning, infrastructure and economic development department, reported there would likely be significant and expensive legal costs and the city may not fare well in the ongoing litigation with the developer if council decided to stall the project.

City staff “held 16 meetings with the applicant to discuss the numerous improvements needed to satisfy the heritage permit conditions,” the officials said in their memo. “This included a full-day workshop with the architects in their Toronto offices attended by city staff and a return fifth visit to the urban Design Review Panel in March, 2019.”

“These efforts built upon the previous engagement efforts, including public consultation on the site plan control application which included two public open house sessions, online engagement including a survey tool and a webpage on Otawa.ca dedicated to the Chateau Laurier, in addition to the usual posting of on-site signs, notice to community groups, and making the plans and studies available on the Development Application Search page,” among other efforts.

The city officials said the developers made several changes as requested, leaving the developer with three options if the city decides to hold up the project.

“Given the opinion of planning staff with respect to he conditions it is very likely that the owner would be successful in obtain a declaration that the three conditions have been fulfilled,” the municipal memo said.

Finally, the owner could appeal the refusal of the Chief Building Official to issue a building permit.

The city officials say the owner would likely be successful, but because the process will be quicker with the second option, they would probably select it. In any case, the city would need to pay at least $100,000 in court costs, O’Connor and Willis wrote.

At Wednesday’s council meeting, councillors concluded that the legal costs could reach upwards of $200,000 million and, since they believe the city would lose in court, this would be a waste of taxpayer dollars, even though none spoke in favour of the design.

Larco, for its part, says it is not interested in revisiting the design and wants to get to work on the building.

The Ottawa Citizen reports that Mayor Watson believes the controversy will end up in court anyways, as what it describes as “the upstart Friends of the Chateau Laurier retained a lawyer to opine on council’s decision this week”.  However, the group hasn’t indicated if they would pursue court action to stop the design.

The Databid.com file about the Chateau project does not list or reference a contractor or subtrades for the project but names Architects Alliance of Toronto as its designer.