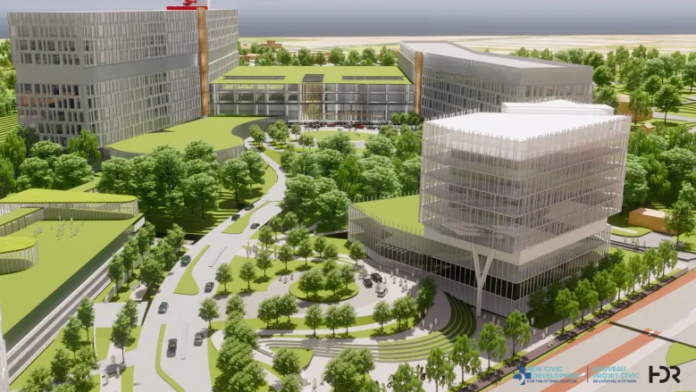 Ottawa’s planning committee has approved a proposed master site plan for the new Civic Hospital campus on the federal Central Experimental Farm site. The project has an estimated cost of $2.8 billion.

The Oct. 4 vote followed a full day of public delegations on Oct. 1, when speakers raised issues relating to green space and parking.

Two of the six council members, representing districts close to the site, opposed the plan.

Councillor Shawn Menard reiterated his frustration with the lack of democratic input in how the site was chosen, as well as the placement of important facilities away from the nearby LRT station and the intersection of Carling Avenue and Preston Street. Jeff Leiper also expressed his opposition.

However, Coun. Riley Brockington, whose ward encompasses the majority of the proposed new campus, voted in favour, though he expressed concerns about the experimental farm’s status.

Committee passed a motion put forward by Brockington asking the Ministry of Agriculture and Agri-Food Canada, the Ministry of Environment and Climate Change Canada and the National Capital Commission to protect the farm.

Steve Willis, the city’s general manager of planning and economic development, said the local government’s position aligns with a proposal for legal protection for the farm by Ottawa Centre MP-elect Yasir Naqvi, the broadcaster reported.

Three central Ottawa councillors, Menard, Leiper and Catherine McKenney,  convinced other members of the committee to pass motions to ensure the hospital and city work together to create a community body to oversee traffic impacts from construction. The motions also seek to improve public transit and cycling connectivity, reconfigure proposed surface parking, and address the loss of mature trees due to the project.

In the new project, the main building would offer 2.5 million sq. ft. of hospital space, but the master site plan outlines multiple phases of development over the next 25 years. The campus would ultimately include a new research building, mixed-use towers with ground floor commercial space along Carling Avenue and a new University of Ottawa Heart Institute.

The master site plan aims to address high-level considerations across the entire campus, which would enable more detailed review and consultation to take place at each phase of development. Under the master site plan, the new campus would deliver:

The master site plan also includes an overview of heritage considerations for the new campus. The heritage report outlines measures to protect the cultural heritage landscape of the Central Experimental Farm, the Rideau Canal and other nearby heritage resources. Measures include further study and analysis of the landscape condition, tree conservation and integration as each portion of the hospital campus is developed.

City council will vote on the recommendations on Wednesday (Oct. 13).