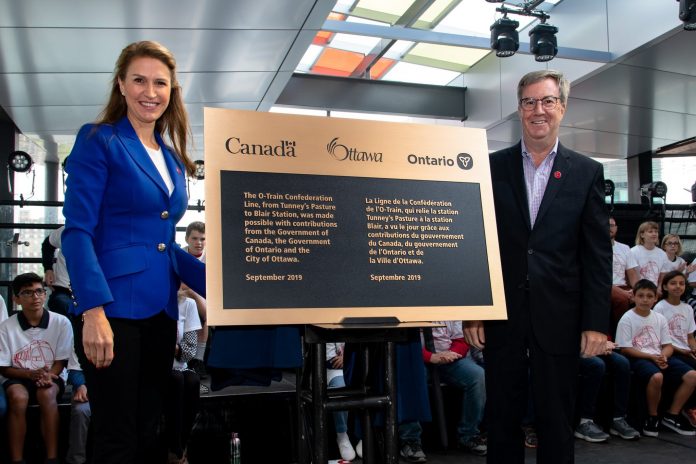 The City of Ottawa’s $2.1 billion Light Rail Transit system started operations on Saturday – but only after the city held back $59 million when it made its final payment to the Rideau Transit Group (RTG).

The reason: The project, officially deemed complete on Aug. 30, was 456 days behind schedule John Manconi, Ottawa’s general manager, transportation services, said the city calculated its extra costs because of the delay and deducted them from the final scheduled $202 million payment.

The city had estimated in June the delays would cost about $35 million for extra costs including keeping regular buses on the road longer than planed, extending bus detours and paying incentives and overtime to bus drivers. But these costs were based on the assumption the project would be completed by Canada day, Manconi said. Instead, the rail system, which includes a tunnel under the downtown area, only opened on Saturday – so the city added $24 million in extra costs to the tab.

The withheld funds include separate $1 million penalties for missing four official deadlines.  While three of these payments were deducted from an earlier payment in July, the last $1 million was added to the final payment reduction.

“Fifty-nine million dollars is what we’re deducing off their payment,” Manconi said as he explained the deduction. “We’ve tracked all our costs to date, the overtime, the premiums. Our mandate was very, very clear to stay whole in terms of no increased costs to the city, so that’s what’s going out today.”

RTG didn’t immediately respond to the news that the city was slashing its final payment for the project. The consortium presumably will need to take legal action to recover the funds if it believes they were improperly withheld. When a reporter asked about the consortium’s views about the payment reduction, Manconi said: “I don’t care what RTG thinks about that.”

Meanwhile work is proceeding with the project’s second phase.

“Progress is being made on each extension of the O-Train Stage 2 light rail project,” the city reported after a Finance and Economic Development Committee meeting in early September. “Work including borehole drilling, top soil stripping, site office set-up, utility relocation, pre-construction surveys, and tree clearing are currently underway. Staff also provided an update on work happening this fall, including drilling at future Trillium Line rail bridges, the widening of highway 174, and tree clearing along the Confederation Line East and West extensions.”

TransitNEXT, a wholly owned subsidiary of SNC-Lavalin, is building the Trillium Line’s southern extension to Riverside South, one of the final fixed bid projects the contractor won before deciding to change its business model this summer, as it deals with political controversy and legal challenges related to international bribery scandals.

SNC-Lavalin also one of three the three RTG partners that built the much-delayed 13-stop Confederation Line. The other two RTG partners are ACS Infrastructure Canada Inc. and EllisDon.

For the new east and west arms of the Confederation Line, the city has signed on with East West Connectors (EWC) — comprised of U.S.-based Kiewit Corp. and French firm Vinci.