Home Around the province Ottawa’s construction industry one of only four “hot” markets in the world:...
Facebook
Twitter
Email
Print 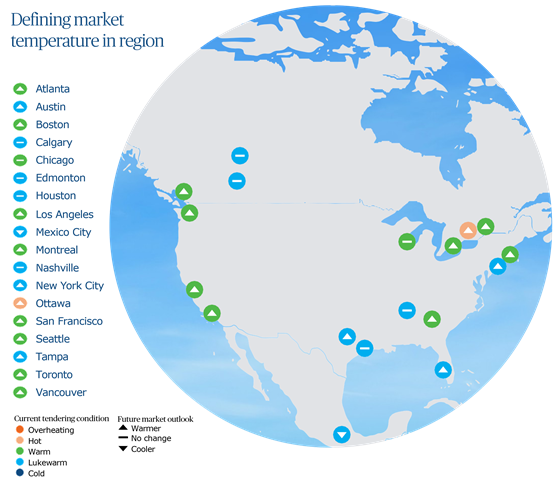 Fuelled by massive regional infrastructure projects and a thriving local economy, Ottawa is the only construction market of 18 in North America defined as “hot” in Turner and Townsend’s recently published International Construction Market Survey (ICMS). The three other cities, among 90 surveyed internationally, are in Europe.

The report by the global professional services company says price inflation is expected to reach 6 per cent this year, and remain at five per cent in 2021 and 2022, with significant labour shortage problems. Turner and Townsend projects contractors’ margin will be 5 per cent.

“As markets warm, we’re likely to see more construction projects starting,” the report says. “So, with a significant number of markets in recovery and warming up, this should feed into higher levels of activity across the globe. In turn, as many markets compete for scarce resource, and respond to governments investment drive, inflationary pressures may well increase.”

While Ottawa’s market is hot, contractors are expected to be less busy in the Greater Toronto Area, with conditions turning “lukewarm” in the next couple of years, Turner and Townsend reports. Inflation will be 5 per cent for 2021, 2022, and 2023. The contractor’s margin is reported at 4 per cent.

Despite the market growth especially in Ottawa, Canadian cities are nowhere near the most expensive places to build. Among 90 market internationally, San Francisco is the third most expensive and New York is the fourth. (Tokyo and Hong Kong take first and second place, respectively.)

Major US cities are topping global rankings as some of the most expensive places to build, with the cost of construction set to soar over the next two years as pressure on labor and materials coincide with major investment and President Biden’s drive to ‘build back better’ from the COVID-19 pandemic, the report says.

The ICMS forecasts that rising prices being seen in the global construction sector will be sustained through 2022 and into 2023.

Ottawa is only one of four markets in the survey that threaten to overheat, joined by Geneva, Munich and Paris where tendering conditions are currently ‘hot’, and set to become ‘warmer’.

London, San Francisco and Sydney, along with 35 other markets may step up to become ‘hot’ from ‘warm’ as activity is set to increase. Many of these markets, and those potentially ‘overheating’, are amongst the most expensive to build in the world already. A transition to less competitive environments, and reduced supply chain availability, could lead to increases in costs.

In the US, the average cost of labor across a cross-section of job roles stands at $109 per hour in New York and $104 in San Francisco. In Canada, labor costs were approximately half that of the most expensive US cities, with Toronto at $52.9 per hour and Vancouver at $53.1 per hour.

Widespread disruption to global supply chains seen through the pandemic are being sustained by high demand and competition for key materials between global markets including the US, Europe and China. Globally, demand for steel, softwood and copper piping have seen prices rise sharply over the year, with increases of up to 40 per cent seen in some international cities.