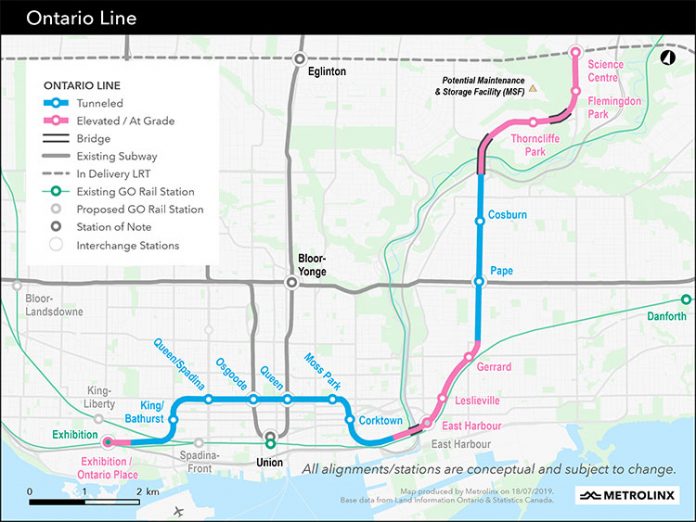 Planning for the Ontario Line subway expansion in Toronto should continue even though transit ridership has declined as a result of COVID-19, two veteran transportation planners indicated in a podcast kicked off this week by the Residential and Civil Construction Alliance of Ontario (RCCAO).

The podcast, Focus on Transit, features David Crowley, a transportation planner who spent seven years in senior service planning positions with the Toronto Transit Commission, in conversation with transportation planner Ed Levy, a civil engineer and author of Rapid Transit in Toronto: A Century of Plans, Projects, Politics and Paralysis.

It is the sixth installment in a nine-part series for the RCCAO, called Conversations About Construction, that is aimed at raising awareness about issues affecting the construction industry.

Both commentators agreed that the Ontario Line is essential to the health of Toronto’s downtown and the increased subway capacity will lead to more people from under-served areas in the city and from the suburbs using transit to get to the core.

Levy said he’s concerned that the decline in ridership due to COVID-19 will give politicians an excuse to save money by deferring the relief line. After years of planning this would be a big mistake.

“I think we’ve got to complete the network,” explained Levy. “There is no other way of serving the mixed-use downtown that we’re beginning to get. But the outer area also needs to have much better non-subway-type transit focused on certain major hubs.”

Crowley noted that during the recession in the early 1990s, long-range transit planning came to a screeching halt and there was no urgency to do anything as Toronto lost 200,000 jobs over four years.

He said it’s difficult to say exactly how the pandemic will affect the way people work in the GTHA and what the implications are going to be on future employment, but if Toronto’s core is to support a dynamic business and residential centre the city needs a functional transit system focused on the region’s core.

The podcasts cover a wide variety of topics related to the residential and civil construction sectors. Dave Trafford, host of the Weekend Morning Show on Newstalk 1010 in Toronto, leads the discussions. Three more podcasts are scheduled to be released on Mondays over the coming weeks.

RCCAO is a unique alliance of construction labour and management groups whose members build the homes, transportation and water systems that are of critical importance to Ontario residents and businesses.