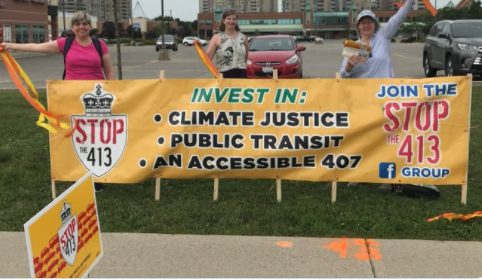 The 16-kilometre route is planned to connect the 400 and 404 highways with access through Bradford West Gwillimbury.

“Highways don’t add to the financial coffers, hey make people sick . . . and they cost a lot more than what they give in operation and maintenance,” Margaret Prophet, executive director of the Simcoe County Greenbelt Coalition said in a statement. “What we want are communities that are equitable, that are healthy for our children, that keep Lake Simcoe clean, that keep it so we can have generations of people using it.”

A province-wide day of action against new highways, included rallies in Brampton and Caledon where the focus was construction of Highway 413. 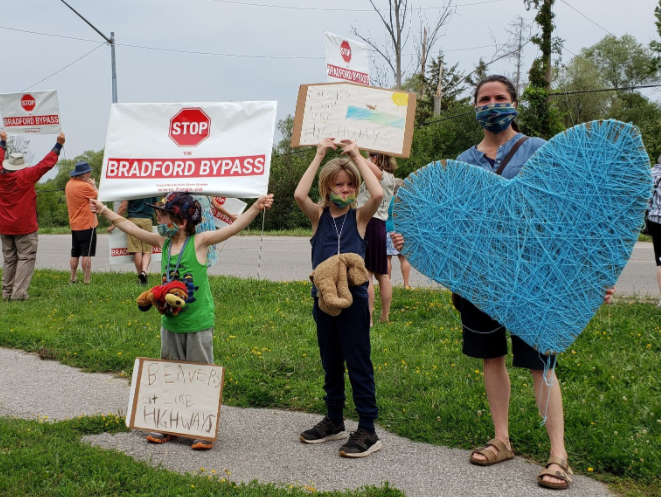 “If built, the highways would pave over farms, forests, wetlands and a portion of the Greenbelt and cost taxpayers upwards of $6-10 Billion. Highway 413 alone would also add over 17 million tonnes of greenhouse gas emissions by 2050, at a time when cutting emissions is more urgent than ever.

“Enough is enough. We need to show the province that Ontarians do not want more megahighways, we want local produce, effective public transit and livable, walkable communities.”

The provincial Green Party is  calling on Premier Doug Ford to protect the Greenbelt and cancel Highway 413 and the Holland Marsh Highway.

“We don’t need more highways that pave over greenspaces, wetlands and farmlands and lead to more carbon pollution and sprawl,” Ontario Green Leader Mike Schreiner said. “What we need are investments in transit, smart development and an actual commitment from Doug Ford to protect the Greenbelt.”

Public pressure against the “ill-advised and reckless” Highway 413 and Holland Marsh Highway continues to rise, according to Green candidate Laura Campbell who joined events in her riding of Dufferin-Caledon.

“Both of these highway projects will not reduce commute times, and they’ll encourage sprawl and increase climate pollution in the process,” she said. “Carbon emissions we simply can’t afford anymore.”

Highway 413 will pave over 2,000 acres of prime farmland and cross 53 water points including rivers, streams, and wetlands.

“We need streams and wetlands for flood mitigation. We need clean rivers for drinking water. We need farmland for food, and in their role as carbon sinks,” Campbell stated. “All of these things are compromised by the highway alone — not to mention the urban sprawl that will follow in decades to come.”

Campbell highlighted that Highway 413 will cost up to $10 billion of public money.

“That’s money that we could be spending on safer schools, affordable housing, subsidized dental care, mental health services, and transit.”