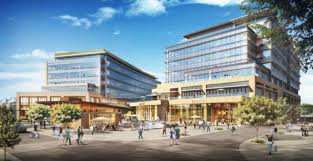 Will Sudbury join the network of cities connected through the World Trade Centres Association (WTCA)? Following a presentation before the City’s finance and administration committee, it’s a possibility.

A group pitching the $55 to $65 million centre for Sudbury told committee it would connect the city to a global network operating in 330 cities, in 90 countries. Speaking on behalf of the local group, former mayor Marianne Matichuk told committee “we are confident that this project is a real game-changer for our city.”

Martin Salloum, regional development manager with the World Trade Centre Association gave a brief history of the association which celebrates its 50th anniversary this year, but has its origins in New Orleans, 75 years ago when the Mississippi Port Authority decided to build an office tower on the shore of the river, and landed on international trade as a model.

“They went out and solicited tenants who were involved in … international trade (and) they filled the building with those tenants, with the idea that if they networked together they could do business together,” he said, adding the idea caught on in other cities, eventually leading to the creation of the association in New York City.

“The World Trade Center Greater Sudbury proposal also confirms the organization’s intention to pay property taxes, and has included this cost in its initial financial plans as estimated at between $750,000 and $1.5 million. The proposal notes that by projecting an annual property tax payment of $1 million, the City could recover its initial contribution by 2033,” reads the report.

The trade centre, according to a staff report on the proposal, would be located in downtown Sudbury. The centre is envisioned to be “the premier location to connect Greater Sudbury to the world … fostering “a vibrant community of like-minded companies, entrepreneurs, support services, government and non-governmental agencies.” The facility’s tenants, partner agencies, and organizations (would) share a common purpose: “to build prosperity through international commerce.”

The vision for the centre is of an iconic building in the downtown core, perhaps working with the City’s Junction project, potentially incorporating a hotel and a parking structure, with the goal of maximizing conference facilities within the community.

Back in January 2019, council directed  staff “to explore the potential to attract private sector participation into the Junction projects” including “residential, hotel and commercial development that complements and supports” the functional programming and mandate of the Junction projects. Staff met with proponents of the trade centre to “discuss potential collaboration with the Junction … project, comprised of the Convention & Performance Centre. World trade centres are often co-located with convention facilities in other communities, to leverage the amenities and services these types of spaces provide,” says the report.

Similar models exist in Vancouver, Edmonton, and Halifax, all partnered with the municipalities. Other Canadian centres are Montreal, Saskatoon, Toronto, and Winnipeg.

Matichuk called the proposed arrangement a “win-win” for the city.

“The addition of the world trade centre to the conference centre complex will act as an economic driver and anchor tenant, providing a more complete suite of services to better serve greater Sudbury’s business sector … it will be an integral piece of new economic activity.”

“This unsolicited proposal has features that align with Council’s strategic goals. Staff have not undertaken any primary research or due diligence to assess the business plan included in the proposal. It reflects features that could complement Council’s plan for a conference centre,” concludes the report.