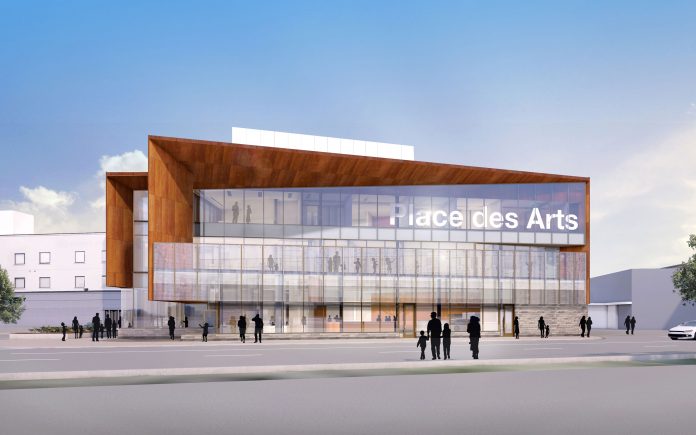 Phase 2 of the construction of the Place des Arts in Greater Sudbury is almost ready to go. Tenders for the project are expected to be awarded by June of 2019.

An architectural consortium composed of Sudbury firm Yallowega Belanger Salach, along with Toronto firms Moriyama and Teshima, has plans set to go on the $30 million project, which will result in a 40,000 square foot multidisciplinary arts centre at the corner of Elgin and Larch in Sudbury’s downtown.

The centre, and the 50,000 additional annual visitors it is expected to attract, will be key a larger revitalization plan being realised in the heart of Greater Sudbury. Beginning with Laurentian’s McEwan School of Architecture, and leading down to the shores of Ramsey Lake, city planners have developed a master plan to revamp public spaces and bring new life to the area.

“We wanted something a bit audacious, and I think they’ve come through with that very well,” he says of the architects’ plans, which were revealed to the public in March 2019.

The four-story building is the combined effort of seven founding member groups, which together represent a great history of artistic effort in the region.

Léo Therrien, newly appointed executive director of the centre, says the fact that the groups have shown such a long-standing concerted effort has gotten a lot of positive attention. The groups plan to use the shared space to bring together a currently disparate arts scene, and bring the community into the fold.

The building will house a concert hall, black-box-style multifunction studio, contemporary art gallery and 10,000 square feet of office space for the founding organizations.

Construction in the busy downtown core is expected to be a challenge, Lajeunesse says, because the plans for the building reach nearly to lot lines, and so do those of existing neighbouring buildings. “It will be a bit of a Swiss watch to get a construction site set up in the location,” he said.

Phase one of the project was completed in the fall of 2018, which included dismantling the existing parking lot and decontamination of the site. Environmental imperatives were extra stringent because of the daycare that will be housed in the building.

Sudbury’s Place des Arts is scheduled to open its doors in 2020.