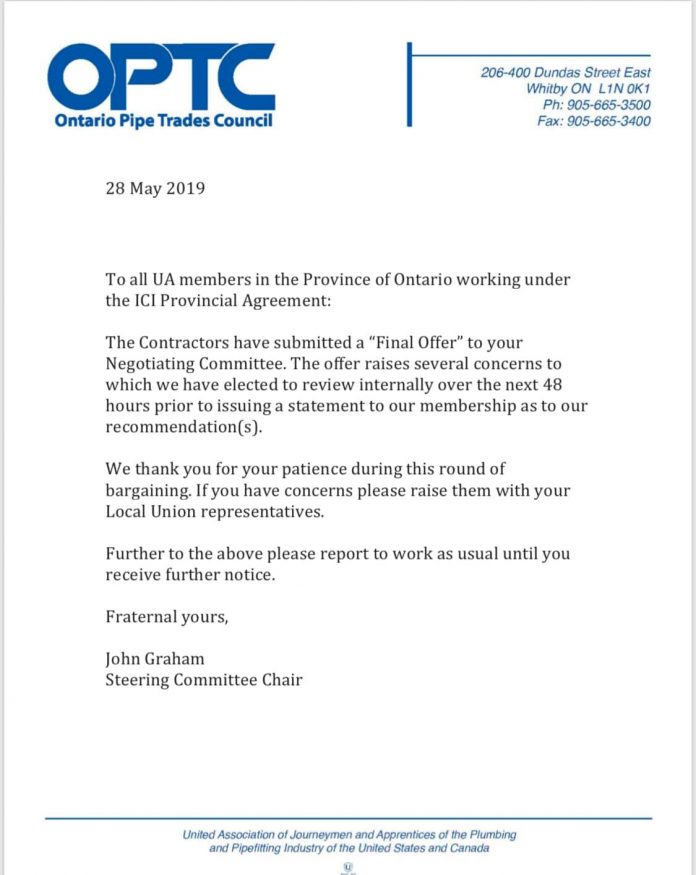 The rocky road of labour negotiations affecting 12,000 Ontario plumbers and pipefitters took a surprising turn in the middle of the night Tuesday morning when the Ontario Pipe Trades Council (OPTC) called off a strike that had been planned to start at 12:01 a.m. after it received a “final offer” from the Mechanical Contractors Association of Ontario (MCAO).

Details of the offer were not disclosed in a brief memo issued more than two hours after a previously announced strike deadline. Many plumbers, having received instructions to take their personal tools home at the end of work on Monday, and without word on the negotiations, decided to stay home on Tuesday. Others reported on Facebook to their United Association (UA) Local 46 in Toronto that they got very little sleep, as they waited for word.

“The contractors have submitted a ‘Final Offer’ to your negotiating committee. The offer raises several concerns to which we have elected to review internally over the next 48 hours prior to issuing a statement to our membership as to our recommendation(s)

“We thank you for your patience during this round of bargaining. If you have concerns please raise them with your local union representatives.

“Further to the above, please report to work as usual until you receive further notice.”

The memo doesn’t say specifically how the MCAO, the employer bargaining authority, has proposed answers to two issues that have been “show stoppers” in negotiations with the OPTC – namely the contractors’ insistence that pipe trade workers revert to a 40 hour week from their current 36 hour schedule, and allow employers to have “naming rights” for employees (who can be sent anywhere in the province) rather than relying on local union hiring halls to select the people to be sent to job sites.

Wayne Peterson, executive director of the Construction Employers Co-ordinating Council of Ontario (CECCO), said on Monday that he believes neither the union nor the employers want a strike, and there could still be negotiated end to the impasse.

He suggested that the employers might introduce compromises to make it easier for the union to accept the changes – perhaps setting out specific and narrower conditions when the 40 hour work week would apply, or establishing “sunset clauses” on rule changes. Similarly, there may be some level of control of the “naming rights” so that the union doesn’t lose all of its power in these areas.

He said employers want to resolve the naming rights issue so they can bid jobs and work throughout the province with a labour force they know and trust.

In contrast, the hiring hall model where the union sets the member is based on the “union philosophy that everyone is equal, and everyone is capable of doing the job,” he said. “But we know, no matter what the industry, you have good employees and bad employees, and the productivity level by the individual is different.”

Certainly, some plumbers were unhappy with their sleepless night and the lost day of work for the strike that didn’t start when they thought it would.

“I waited all night and at 3:40,” wrote one plumber on Facebook. “I got the message not good. I’m sleeping today.”

Another member posted a GIF from a classic Three Stooges segment portraying Curley as an incompetent plumber trapped in his own pipes.

And a third wrote: “Sitting at home today. No msg. Last night. Loosing out today. So unprofessional.”

Notably upwards of 1,000 readers were searching and visiting the Ontarioconstructionnews.com website for news about the possible strike late into the evening Monday night. At some points, there were more than 150 simultaneous visitors to the site.