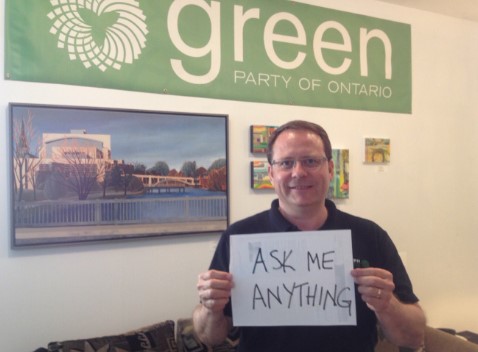 Green Party Leader Mike Schreiner says his YIMBY plan is the way to build 1.5 million new homes in Ontario over the next 10 years.

The “Yes in My Backyard” Housing Strategy will significantly increase the supply of homes in Ontario by 1.5 million over the next 10 years “so young people can have a chance at finding an affordable place to call home,” Schreiner said at a campaign stop in Toronto this week.

Under the plan, Ontario Greens would:

1. Expand as-of-right zoning to allow fourplexes, triplexes and duplexes in all neighbourhoods

2. Incentivize and fast-track applications for secondary suites like basement apartments and laneway houses

3. Pre-zone for mid-rise developments on transit corridors and main streets to get projects moving faster and reduce building costs

5. Launch a province-wide “Yes in My Backyard” initiative to address NIMBYism and raise awareness on the benefits of infill missing middle, mid-rise and community housing developments in existing neighbourhoods

“A whole generation of young people are giving up hope of ever finding an affordable place to call home,” Schreiner said.

“We urgently need to take a Yes-in-my-backyard approach to housing where we creatively make use of existing space in built-up areas to increase the supply of homes.”

Doug Ford’s climate-polluting sprawl approach to housing will only make the housing affordability crisis worse. People can’t afford expensive long commutes where they are forced to drive until they qualify for a mortgage.

“When it comes to the housing affordability crisis, half measures won’t cut it,” Schreiner said. “We can’t take short cuts on people’s future.”

“We need new solutions to old problems. And Ontario Greens have the leadership to deliver on the more affordable Ontario you want, where you can find a place to call home in the community you love.”