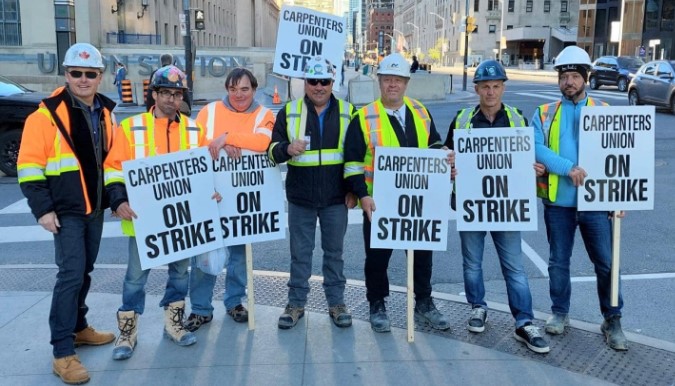 With three days of talks scheduled this week (today, Wednesday and Thursday), union negotiators are optimistic that a deal can be reached for Ontario’s striking carpenters in the ICI sector.

“We are back at the table Tuesday, Wednesday and Thursday, so we have time enough to craft a deal – we hope,” Mike Yorke, Carpenters’ District Council of Ontario (CDCO) president and director of public affairs and innovation said on Sunday.

“We are optimistic in favor of making a deal happen . . . the construction sector is too important to Ontario’s economy to drag this out further,” he said, accusing employers of delaying talks by 12 days while the union was prepared to return to the table.”

Negotiations stalled on May 12 and in a statement, the Carpenters Employer Bargaining Agency chair Jim Vlahos said he was “disappointed” that a strike has been launched.

“We worked diligently to avoid this outcome by directly and fairly negotiating with representatives of the union,” he said. “These negotiations resulted in province-wide settlements that were agreed upon by all the carpenters’ locals, who also recommended these settlements to their membership for ratification.

About 15,000 carpenters across Ontario have been on strike since May 9, demanding higher wages for workers impacted by high inflation and the spiking cost of living.

Seventy-five per cent of the members of 16 local unions of the CDCO across the province voted in early May to reject the latest agreement.

The International Union of Operating Engineers (IUOE) voted on Friday to ratify a new three-year provincial agreement – with the highest wage and benefits settlement so far in the ICI construction sector.

They will return to worksites Tuesday, ending a three-week strike.

Operating engineers returning to work May 24

No doubt, the IUOE settlement will be on the minds of negotiators on both sides of the carpenters’ negotiating table.

In principle, each trade and union negotiates independent of others, but Yorke said “the reality is that benchmarks and other settlements can have an impact, if only for discussion points”.

“Just as the recent releases by Stats Canada on the CPI increase year over year in April of 6.8 per cent, building on the March numbers of 6.7 per cent. It all goes into the mix at the bargaining table.”

This is the first time carpenters have been on strike in Ontario in 34 years.

“With the crisis of affordability and the cost of living crisis, a strong stand was required at this juncture of the Industry,” Yorke said.

And it’s a crisis that is impacting workers across all trades who are striking on the same issues.

“As a union not having a strike in more than a generation, it was reassuring to receive such support from the OFL, the Labour Council and other construction unions on the picket lines each morning,” Yorke said. “This has been a unique round of bargaining.”