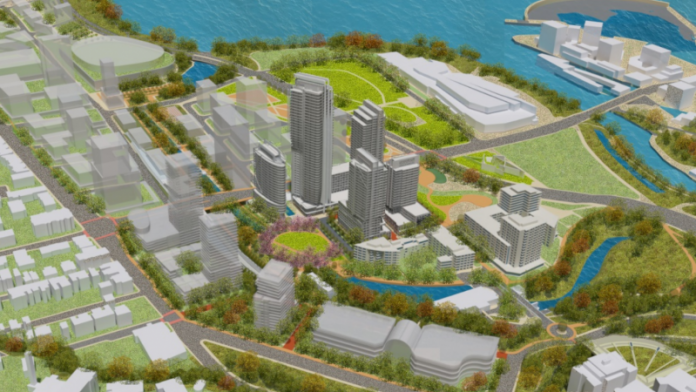 Claridge Homes is getting ready to launch a 2.1 hectare LeBreton Flats development with 600 residential units in two mixed-use highrises, with possibly another three towers to follow.

The East Flats project would include thousands of square feet of commercial space and more than 1.5 million sq. ft. of housing in the 25-to-45 storey towers.

The first stage of the project northeast of the Pimisi LRT station will include a 25-storey condo (276 units) and 333-suite, 30 storey rental building. These structures will be on the block bordered by Lloyd, Fleet and Lett streets east of Booth Street.

The initial project would also include some 7,200 sq. ft. of retail and 4,000 sq. ft. of daycare space, underground parking for 347 vehicles, room for 470 bicycles and indoor and outdoor amenity space.

Site plan documents filed with the City of Ottawa says the project provides “a significant opportunity to add vitality and amenities to LeBreton Flats and the broader downtown.”

Plans filed in 2018 say overall, the 1,950 overall residential units would include “a range of apartment sizes and tenures to accommodate households of a range of compositions and incomes” and a “significant component of affordable housing.”

While Ottawa City Council approved the project in 2018, the builder requires a zoning amendment to lift a development hold on the proposed site of the first two towers and transfer it to the property bordered by Booth, Lloyd and Fleet streets, where Claridge originally planned to start construction, Ottawa Business Journal reports. “Holds can only be removed when a site is proven to have adequate infrastructure to support more intensification,” the publication says.

Besides shifting the location of the first buildings, Claridge’s updated proposal also doubles the total floorplate of the residential component on that block to more than 500,000 square feet, while the number of units is jumping from 350 to 609.

The developer says it plans to meet with residents to discuss its plans for the next phase of the project once government-imposed restrictions designed to curb the spread of the novel coronavirus are lifted.

Claridge’s proposal is just the latest in a string of high-profile developments near LeBreton Flats, which is expected to undergo a multibillion-dollar redevelopment beginning in the next couple of years, the business publication reported.

Just a few blocks west at 900 Albert St., Trinity Development Group and partners InterRent REIT and PBC Real Estate Advisors are planning a mixed-use development near the intersection of the Trillium and Confederation light-rail lines, The Ottawa Business Journal reports.

The project is planned to include three towers of 65, 56 and 27 storeys and currently calls for about 85,000 sq. ft. of office and retail space and 1,300 residential apartment units.

Meanwhile, the nearby $1.5-billion Zibi project is rapidly progressing on the former Domtar lands just north of the Canadian War Museum in both Ottawa and Gatineau. The 15-hectare site includes condos, shops, office space and parks.