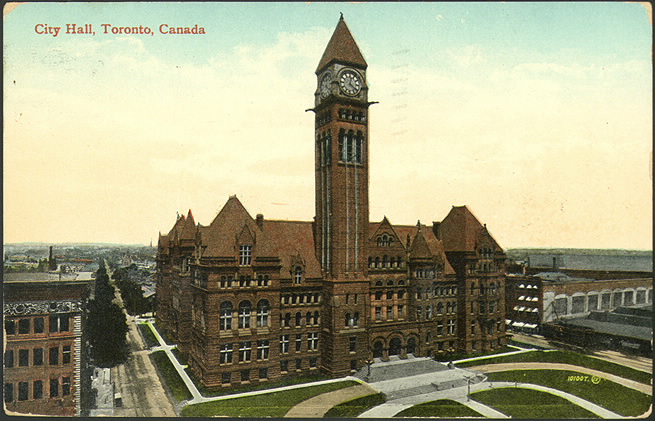 Long before architecture was a regulated profession, a young man set Toronto’s pace for high-quality design and construction. Edward James Lennox was a powerhouse of architecture, from intricate drawings to finished products. Lennox delivered beautiful buildings with lasting beauty—occasionally, with a scoop of rebellious irreverence.

The son of Irish immigrants, Lennox was born in Toronto in 1854. While imbued with artistic talents, the boy did not shine academically. No matter what, he was going to be an architect.

“However, his father did not approve and it was only after much pleading that he was permitted to attend architectural drawing class at the Mechanics Institute,” said Marilyn M. Litvak in  Edward James Lennox: “Builder of Toronto.” The teenager’s innate ability was acknowledged, and though he was one of the youngest students, ‘“he carried off first prize and diploma at the head of about sixty pupils.’”

Apprenticing with architect William Irving, Lennox absorbed skills and sculptural design theory that would inform his future work. In 1876, after examining European architecture for a year, the passionate architect partnered with W.F. McCaw. Five years later, Lennox established his own booming firm. “By 1885 his was one of the largest practices in Toronto,” according to E.J. Lennox Fonds on Archeion. The architect tackled all projects with professional enthusiasm.

Applying his own style to Richardsonian Romanesque, Lennox incorporated hipped roofs, widely-rounded arches, and grand towers into his designs. Ornate sculpted features added a flair of personality to the enduring stone and brick structures.

In 1886, the Lennox firm won the competition to design the Toronto’s municipal buildings (now called Old City Hall). Drawings for the central location on Bay Street were altered to cut costs by removing the courthouse. Laying the cornerstone in 1891, construction commenced, along with obstacles.

Demanding superior work, Lennox found the contractors were deficient. The architect made a fuss with city authorities, and the constructions workers were fired. In a rare step at that time, Lennox took over as superintendent of construction.

Impatiently waiting for completion, Toronto’s Mayor Shaw announced the building was done on Sept. 18, 1899. It was not. Work progressed and costs increased. Near the top of the l06.3 metre-high clock tower, a clock face was installed at each of the four sides; bells were mounted in 1900, just in time to ring in the new century.

Submitting his bill to City Council in 1907, Lennox expected payment for “all the extra time and effort in to ensuring Toronto got a city hall that was the envy of municipalities across the continent,” said Mike Filey in the Toronto Sun, November 25, 2017.

The invoice for nearly $300,000 was rejected. Councillors were outraged at overruns and interest reaching nearly $100,000 above initial estimates. Adding further insult, they refused installation of the architect’s plaque. But Lennox would not be denied recognition.

Aggravated, Lennox “commissioned an artist to etch a series of silly-looking faces into the base of the stone pillars at the entrance,” wrote Amanda Storey in Dolce Magazine. It seems the caricatures represented the faces of stubborn councillors. “And in the middle pillar he had his own face etched, handsome and serious.” The architect’s rebellion wasn’t finished yet. He had his name and title–E.J. Lennox, Architect–carved into stones along the eaves. Inconspicuous, but there if one really looked.

Before the courts, Lennox accepted an offer in 1912, receiving a total of just over $121,000. (In today’s dollars, this would be just over $2.7 million.) Fortunately, the architect was working on on other jobs at the same time, designing the unique Casa Loma for Sir Henry Pallatt, and the stately, luxurious King Edward Hotel.

When architecture became a regulated profession, 75-year-old Lennox applied and was given status in 1931. Involved in construction from the ground up, the designer was viewed as “a very intense, hands-on architect,” stated heritage consultant Sally Gibson in “An Illustrated History of the King Edward Hotel.” Lennox was “someone who paid as close attention to the ventilation and heating system, as the colonnades and detailing of the public spaces.”

Architecture may have occupied his imagination and days, but Lennox made time for family and the Anglican Church. Also a Mason, he was an Orangeman, participated on the Board of Trade and was a member of Toronto Transit Commission board.

Passing away in 1933, Edward J. Lennox left behind his wife Emeline, their four children, and several grandchildren. Many Lennox buildings remain standing, adding distinctive architectural grace to Toronto. The Old City Hall was named National Historic Site of Canada in 1984.

© 2020  Susanna McLeod. McLeod is a Kingston-based freelance writer who specializes in Canadian History