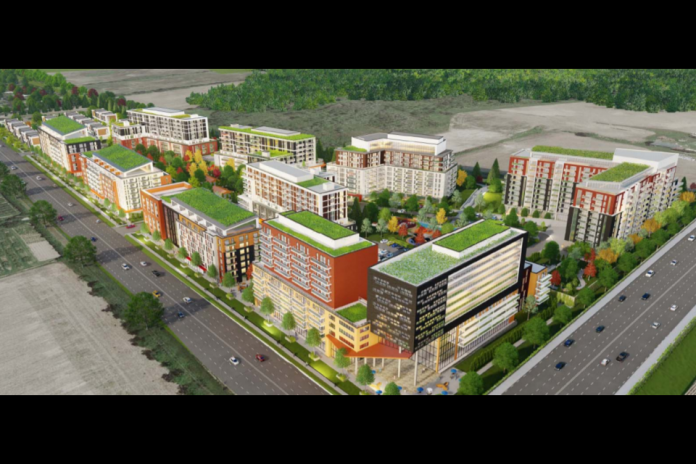 The city of Barrie is considering a proposal that would add more than 1,200 condo units and 5,000 sq.-ft. of commercial space to the city’s southern border.

Jones Consulting Group’s Ray Duhamel presented the proposal at aplanning committee meeting on behalf of landowner Asa Development Inc. The 25-acre property is at 989 Yonge St., along the border with the Town of Innisfil.

Currently zoned agricultural, the land was annexed from Innisfil several years ago. According to the developer, the proposal aligns with the province’s growth plan and policy, with intensive growth near transit routes and other community facilities. It includes a new community centre and schools nearby.

“This is a fairly significant departure from the historical way of developing in Barrie and typical suburban neighbourhood development,” Duhamel told the committee.

The highest density development is at the southern portion of the property, commercial space is along Yonge Street and townhouses are at the far north end.

“This isn’t just a pretty picture that is being flashed in front of you,” Duhamel said. “The intention is to move forward with a site plan application for a mixed-use development.”

The “intention is to create an interesting space . . . not “just plunk 10 buildings on the same site,” he added.

A site plan application could be approved in 2021, and construction would start immediately and could last 10 years. A staff report with a recommendation is expected at general committee in the fall.