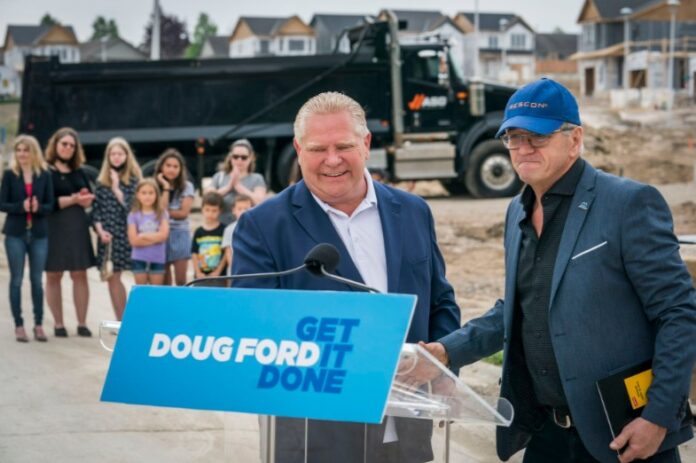 The Residential Construction Council of Ontario (RESCON) is throwing its support behind the PCs, the latest of several trade groups to endorse Doug Ford.

“The Directors of RESCON and I are endorsing Doug Ford and the Ontario PCs for re-election,: president Richard Lyall said Saturday at Ford’s campaign stop in London. “He has shown real action already and is committed to further action to fix the housing supply crisis.”

Lyall introduced Ford at the event as “a true friend to the residential construction industry.”

“Myself, and the team at RESCON, as well as the builders we represent across Ontario appreciate the work you and your ministers are doing and the actions you have taken to dramatically boost housing supply in Ontario.

To tackle the current housing shortage crisis, Lyall says the government must attract more youth to skilled trades, cut red tape and transition to a digital standard for planning and development applications.

“Doug Ford and his team have shown incredible commitment to this cause, first by deeming our workforce essential during the pandemic and now with legislation such as the More Homes More Choice Act and the More Homes for Everyone Act.

Ford stopped at a 200-home subdivision under construction on Saturday, pledging his government will increase affordability and speed up construction by streamlining planning processes and speeding up permitting, “cutting everything we can to make sure that they get the permits the door.”

“When it comes to more building homes, no one knows more than the Residential Construction Council of Ontario. You represent the women and men on the frontlines of our plan to build more homes,” Ford said, thanking Lyall for his support.

“We have almost every trade union in the province supporting us,” Ford said “They don’t want delays, acknowledging the subdivision he was standing in took 12 years to receive approval and get shovels in the ground.

“Twelve years to get a permit,” he said. “That’s unacceptable.

“Do you know what drives me absolutely crazy? When a developer gets a deposit from hard working folks and two years later, they say ‘Too bad, we’re giving the money back.’,”

In a statement the RESCON Board said the PCs “are the only party addressing the housing crisis with a comprehensive, sensible plan to boost supply, invest in strategies to get more people into skilled trades in construction and other industries through more training and recruitment and pledging to modernize and streamline the development application process”.

“This is the type of forward-thinking action that’s needed.  Housing is a need and vitally important to the economic health of Ontario,” Lyall said.

Prior to calling the June 2 election, the government:

“We are in serious need of new housing supply, attracting more young people into skilled trades careers, and a modernized, seamless development and building approvals process,” the RESCON statement concludes.

“From the comments we’ve heard and the actions that have been taken, the PCs are in the best position to deliver what we nee d to rebalance the scales and put workers in the driver’s seat of the economy while helping more people realize the dream of new home ownership or finding rental accommodation.”