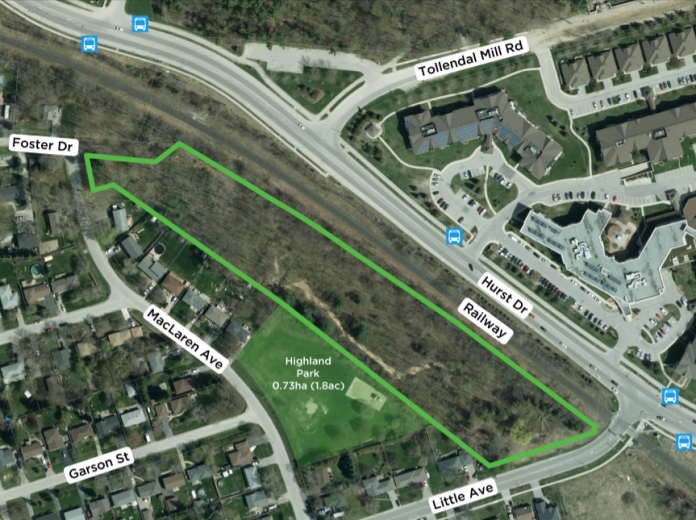 Property owner 428 Little Inc. is seeking zoning bylaw amendments for a five-acre parcel of land near the GO rail line at Little Avenue, outside of the city’s designated high-density nodes.

Celeste Phillips, a land use planner, presented the proposal at a recent public meeting on behalf of the developer. The draft plan of subdivision includes 50 market condominium townhouses and six affordable units.

To go ahead, the property needs to be zoned RM-2. The current zoning allows single detached homes.

According to the public meeting presentation, the planned density is for about 50 per cent of the city’s RM-2 zoning cap and the development includes a more open space than required.

“That is to avoid spillover into the residential neighbourhood,” Phillips said at the public meeting.

Barrie’s Official Plan requires affordable housing, as well as development of vacant land that is near transit and businesses – two requirements that Celeste says the plan meets.

However, residents are pushing back, say the narrow strip of land is not the right place for townhouses.

“It is sort of a green space that the residents have come to enjoy … so its disappointing to see that will disappear,” one resident said. “The entire neighbourhood … I don’t believe there is one resident that is happy about this proposal.

“It’s a very disappointing situation for all of us residents.”

According to the planning consultant, the development is about half of the allowable density for the RM2 zoning – 27.4 units per hectare – half as much as you would see in a typical townhouse development and infrastructure is in place – including a park, transit, commercial developments and full municipal services.

“The province encourages this type of development,” Celeste said.

City planning staff say the application is consistent with provincial planning policies and conforms with city of Barrie regulations. A technical review is underway and a staff report is expected this fall.

“The city’s Official Plan does allow for intensification outside of the designated areas,” Celeste said. Her rationale as to why this property should be considered: It has much lower density than typically allowed in an RM3 zone. Infrastructure already in place, no special zoning is required, scale and height are well below required by the bylaw and over half the property will remain green space – more than the 30 per cent requirement.

“We see an opportunity to create a condominium development on a private road that also had the added bonus of having six affordable units.”

She also included a warning for future residents:

“For those purchasing, vibrations and noise from existing GO trains will negatively impact the owners of the new homes,” she wrote. “Currently, we feel the vibration and are woken by the noise of the passing trains at quite a distance away. Those living right along the rail tracks will have a significantly increased impact. They will be extremely unhappy with their purchase new home, likely feeling “duped.”

Instead, the city should consider several other parcels of land in the area more suited for intensification, she concluded.

Mayor Jeff Lehman asked Phillips about the appropriateness of the medium-density plan for that area of the city.

“The scale of the development (and) the height are all well below what is required by the bylaw,” Phillips said.

The application is undergoing a technical review by city staff and external agencies.

A staff recommendation to planning committee is expected in the fall.