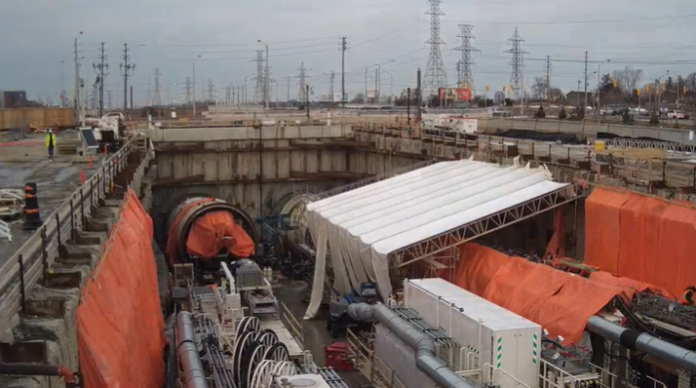 West End Connectors has reached a key milestone on construction of the Eglinton Crosstown West Extension, as tunnelling begins on the seven-stop extension in Etobicoke and Mississauga.

On the job with tunnel boring machines Rexy and Renny

“Today is another landmark day as we break ground on a new tunnel for the Eglinton West Crosstown Extension. We are getting shovels in the ground for this historic project and building world-class transit that will make life easier for the people of the GTA, while supporting the creation of thousands of jobs,” said Premier Doug Ford.

“One of the lessons we have learned through all of our projects . . . is that projects are better if they are separated out in parts and so that’s why we are doing the tunnelling first,” Verster said.

Two other projects are now out for bidding – a tunnel link from Jane Street to Mt. Dennis and an elevated guideway from Scrarlett to Jane that will be released soon.

“I can’t tell you when that will be completed, because it will go to market soon . . . and then we build the stations after. At this stage what we can give you a sense of is backend of ’23, early ’24 we expect the tunnelling segment to be completed, but then we stack the projects thereafter and that gets us to a completion date.” 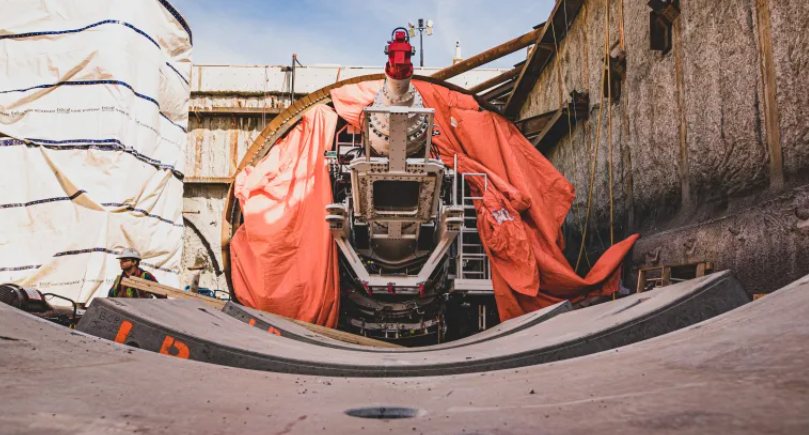 After travelling across the Atlantic Ocean from a factory in Germany to a port in Hamilton, they arrived at the tunnel launch site in Mississauga. Over the next 20 months, these two massive machines will work 20 metres below ground, digging twin tunnels that will stretch over six kilometres.

The two TBMs will start digging from the launch site near Renforth Drive and Eglinton Avenue West, moving 10 to 15 metres a day as they travel east to Scarlett Road, where they will be pulled out of the ground.

“It’s an exciting day for transit infrastructure, as the massive tunnel boring machines – Rexy and Renny — begin carving out the tunnels for the Eglinton Crosstown West Extension. Together with our partners, we are delighted to mark this milestone – a great step forward in extending fast, efficient and accessible transit westward from Mount Dennis to Renforth Drive,” said Michael Lindsay, president and CEO, Infrastructure Ontario.

In July 2021, West End Connectors broke ground at the Renforth launch shaft site for the arrival of the tunnel boring machines in December.

Each tunnel boring machine is 6.7 metres in diameter and can tunnel 75 metres per week and remove 500 cubic metres of earth each day.