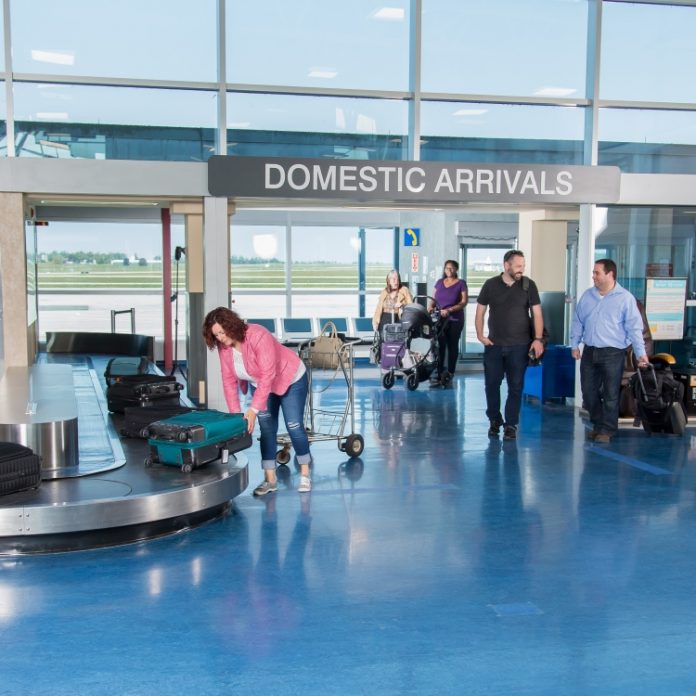 The Region of Waterloo International Airport is one step further along in its $375 million 20-year redevelopment plan.

The airport’s goal is to obtain approval to extend the facility’s two existing runways beginning in 2021. In particular, the airport authorities want to eventually extend Runway 14-32 by 555 metres (1,820 feet) northwest towards Breslau and by 329 metres (1,080 feet) southeast towards Cambridge; extend Runway 08-26 by 529 metres (1,735 feet) west towards Guelph; construct taxiways parallel to the runway extensions; and build access roads around the runway extensions.

Increasing the length of the runways would allow the facility to accept larger airplanes and provide safer landing options during poor weather, including cross-wind conditions. Currently, the airport can only handle narrow-body aircraft (such as a single-aisle Boeing 737). Longer runways would permit wide-body aircraft (like double-aisle Boeing 767s) to take off and land.

Giving airlines more options when it comes to the types of planes that can take off and land is important if the Region of Waterloo (which owns the airport) wants to grow the facility. The 20-year plan that was officially adopted in 2017 sets out conditions that will trigger the next four stages of development—currently the airport is in stage one—and usage numbers are the key statistic that will lead into the next stage.

The master plan (https://www.waterlooairport.ca/en/business/resources/Master-Plan-2017/YKF-2017–20-Year-Master-Plan—2017-2036-without-Appendices.pdf) says that stage two will start when the airport sees 250,000 annual passengers, a figure it estimates at approximately four Boeing 737 flights daily. Presently, the number of annual passengers who use YKF is roughly 80,000. While that may seem like a large gap, it really isn’t, says airport general manager Chris Wood.

He explains that on a 737, “there are 189 seats on each airplane. So if you multiply that by two (for return flights) and then multiply that by 365 that tells you how many passengers you could have.”

WestJet offers a daily return flight to Calgary from the airport, FlyGTA travels between YKF and Billy Bishop Toronto City Airport (CYTZ) on the Toronto Islands during weekdays and Sunwing has weekly flights to the Dominican Republic from December until March. In the past, other airlines have offered regular flights to the U.S. and Canadian cities like Ottawa. Attracting new airlines to the airport is one of the tasks taken on by the Region of Waterloo, says regional chair Karen Redman.

“We’re doing our due diligence. We continue to talk to ultra-low-cost carriers and to the mainstream airlines. But we recognize that airlines are in business to make money. And the airlines that have come and gone from our airport, actually were making money providing service from Waterloo International Airport. Those were business decisions, that they could take the airplanes that were flying from our airport, redeploy them—some of them went to the States, some of them went out west—and it would enhance their bottom line. But it wasn’t that the airline services provided from our airport weren’t making money. Nobody left because it was a financial loss.”

Redman says the region is offering to grant exclusive flight options to airlines looking to use the airport. It is also speaking to international carriers, including those based in the U.S. and South America. Additionally, the region is looking to grow the airport’s cargo handling business.

“We’re leaving no stone unturned, and we know that it will bear really good results.”
Also part of the first stage is the obligation to “review opportunities for rail transit connectivity between the future Breslau GO Transit station, the Kitchener GO Transit line and Toronto Pearson International Airport.” 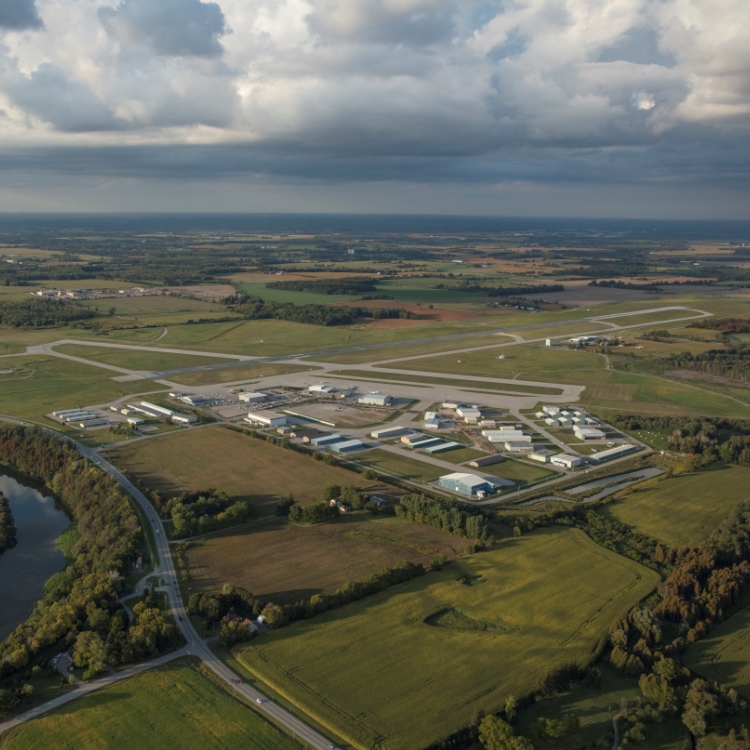 While the issue of light rail and GO Train service in the region has historically been fraught and contentious, Redman says the prospects of getting a new GO station in Breslau near the airport are “great.”

“For about six months we have been part of Metrolinx’s planning area. So we never missed an opportunity to talk to our provincial or federal counterparts about the importance of two-way all-day GO, as well as those kind of linkages,” she says adding there is a push in the Greater Toronto Airport Authority (GTAA) to synchronize air travel, with Toronto Pearson International Airport serving as the international hub and regional airports handling more domestic flights.

“Part of the linchpin of having that work is to have the ground transportation that connects with (those airports). So we’re looking at a proposed GO station in Breslau. We continue to emphasize with senior levels of government, how transformative this kind of land transportation is. And one of the things I think that’s changed when you look at airlines … is that we’re now looking at door to door service. So no longer is it that you get out at the curb at the airport and get on your flight and go to another airport, we’re now looking at the seamless travel of people leaving their front door, getting to their destination and getting back to their front door. And that is intermodal. So we’re very aware that those are all the kind of linkages that are really key.”

Moving beyond stage one (which has $3.6 million earmarked for it), the airport redevelopment project has construction elements laid out in every phase. Stage two, for example, would see the region begin to plan for the reconstruction of Shantz Station Road, which could involve tunneling the road or moving it entirely, and beginning the redesign of the terminal so it can accommodate up to 500,000 passengers. In stage three, there is planning to increase terminal capacity to one million passengers. Stage four includes designing a terminal expansion so the facility could handle up to two million passengers. Stage five would look at ways to make the airport usable for an additional half-a-million travellers.

While accommodating millions of passengers is a concern for the future, there are very real concerns that need to be addressed during this first stage of redevelopment. As mentioned, part of the public consultation process involves telling residents of the immediate surrounding area and the entire region about height restrictions on properties located near the airport and under flight pathways. With the runways being lengthened, home owners and developers of both residential and commercial properties are going to find limitations placed on how high they will be able to build in the future.

Wood explains that a narrow 30km stretch (15km at each end of the runways) will fall under the height-restriction zone, so it could be “thousands or tens of thousands” of properties that will be affected by the federally mandated rezoning. (The airport hasn’t run its final review yet to calculate the total number of properties to be affected.)

Getting the word out about noise from overhead flights is also something the airport is able to do through the public consultation process. According to Wood, noise complaints have been decreasing in number every month in 2019, and with the proposed changes to the runways that trend should continue.

“The other runway, the crosswind runway, would introduce new aircraft use for that runway because currently Westjet can’t use that runway now because it’s too short. So they would be able to use it in once it’s extended. So that would introduce aircraft departing towards Breslau and potentially towards Cambridge as well to the south. We would be able to put what’s called a standard instrument departure turn on it so we could turn away from Breslau as soon as safely able. So that’s one of the plans is to do that. So they would climb on the runway heading towards Breslau but then make a turn, probably to the north, and climb away from Breslau over kind of uninhabited lands.”

Additionally, the airport is conducting environmental impact studies. The master plan acknowledges that wetlands will be affected by the redevelopment, but Wood says studies are being conducted to minimize potential damage.

Laying the groundwork in stage one for all of the future plans is an important step for Wood, even if it’s impossible to predict exactly when the next stage will happen. But he is sure that day is coming.

“We are very confident that we are going to see more service. And it’s happening everywhere else except here. And it’s only a matter of time before an existing carrier or a new carrier sees the potential or jumps on the potential—they all see it, but they need to actually do something about it. So we’re confident that’s going to happen. And that’s why we’re spending all this money to get ready for that time. Because we don’t want to be in a position to say, ‘Hey, we can’t handle another flight. Our terminal is too small or our runway is too small.’ Or ‘sorry, you can’t land because the winds are too strong one way.’ So that’s why we’re getting ready for the whole project right now.”