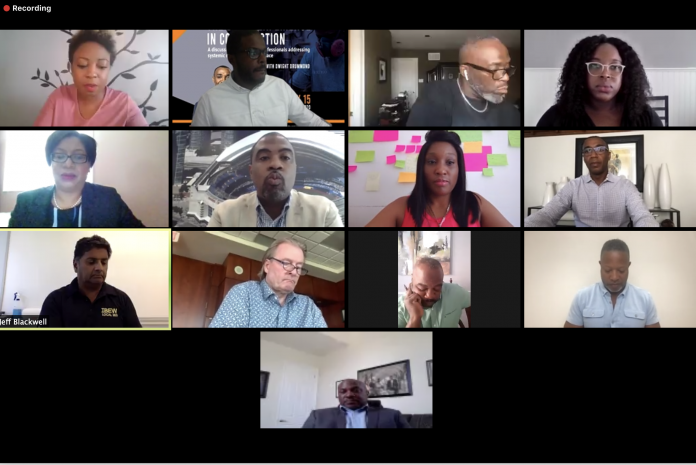 How can contractors, unions, construction workers, employers and community organizations overcome racism on job sites and within the construction industry?

The Toronto Community Benefits Network co-ordinated the discussion, where panelists and the moderator were Black and could speak from first-hand experience about their challenges in working in the industry.

CBC Toronto anchor Dwight Drummond moderated the program where representatives from contractors Aecon and EllisDon, developer Daniels Corporation, and unions including Carpenters Local 27, IUPAT District Council 46 and IBEW Local 353 made clear their organizations’ distaste for racism, while acknowledging there are systemic barriers to blacks entering the industry and advancing to management opportunities.

Richard Whyte, an estimator with EllisDon, for example, said he experienced barriers to advancing within the operations area, so he switched over to estimating. (He is now chief estimator of EllisDon’s civil construction division in Toronto.)

“Quite frankly my choice to go into estimating was because I wasn’t getting opportunities,” Whyte said. “Things worked out pretty good for me but I can tell you right now, with respect to advancement, and I’m going to be quite frank . . .

“This is . . . if you talk with other Black people . . . you’re not being judged by the same yardstick as your white counterparts. Whatever you do, you have to do twice as well, to get the same recognition.”

These challenges are reflected in construction unions, where the membership is largely white and there is a history of less-than-inclusive attitudes.

“We have to be honest, we have to be honest about things,” said Chris Campbell, a business agent for Carpenters’ Union Local 27. “I do acknowledge that in the past, construction unions did not accept black tradespeople in their organization, and it’s a reality.

“But that’s how it was decades ago. Today, it is possible for a carpenter or an apprentice, or an individual who wants to start a career in our union to walk in that day, sign up as a member and get registered for whatever training course that he wants to write.”

However, there are real challenges in helping young people connect with the union, and work through the apprenticeship process, to build a lasting career, he indicated. Community benefits initiatives need to be matched with cultural awareness and support or the young recruits end up in a revolving door experience.

Rhonda Davis, a senior estimator with the Daniels Corporation, described how her organization has created inclusive career advancement opportunities.

“I’m very proud to say and it’s nice to see that currently we have a diverse workforce on our construction sites as well as in the office. As an organization, we have been taking an active role in increasing diversity and improvements.

“There’s always room to do better. Daniels plans to actively convene and participate in discussions to critically examine how we can do that,” Davis said.

“For starters, we’re posting jobs where we are more likely to recruit diverse individuals. For example, for 14 years, we have worked with Toronto Employment and Social Service, Toronto Community Housing and community partners in Regent Park on a local employment strategy for the (area’s) revitalization.

“Through this program, residents in Regent Park, many of them from the Black community have found employment with Daniels, as well as with our trade contractors and consultants. I think it’s important to note that a number of the Regent Park residents that have gained employment, are union members today. I can honestly say that I have seen firsthand how this drastically has changed lives and changed people’s mindsets about themselves, giving them the confidence to see what they can accomplish.

“Over the past three years, we’ve seen a significant increase in Black and racialized team members in our organization. We have a long way to go when it comes to recruiting indigenous team members, and we’re continuing to work on that,” Davis said.

Patience Adamu, manager, employment experience at Aecon, said “everyone is not equal in the way that the candidates (for work) are set up right now.

“Right now we are kind of operating in an anti-Black racist system and a White supremacist system, and that’s the reality.

“So what Aecon has done is designed programs so that we are absolutely creating space, putting our elbows up and pushing out for women and for indigenous folks.

“I’ll be honest with you – we are not there yet,” Adamu said. “We do have quite a bit of diversity at Aecon, particularly in the non-union part of the company. But if you go on the website right now and you look at our board, and you look at the senior executive team, that’s the next goal – to make sure that looks a little bit different.

Jeffrey Blackwell, a business representative with the International Brotherhood of Electrical Workers (IBEW) Local 353, said it is important to know that “we as union leaders stand for multiculturalism, diversity, inclusion, and that we bring people of all these categories into our union and give them an equal opportunity.

“It’s very important and our business manager asked us to join the Daniels Group in a morning stand-down at some job sites, and we went out and spoke to all of the members with our policies and reaffirmed in them,” he said.